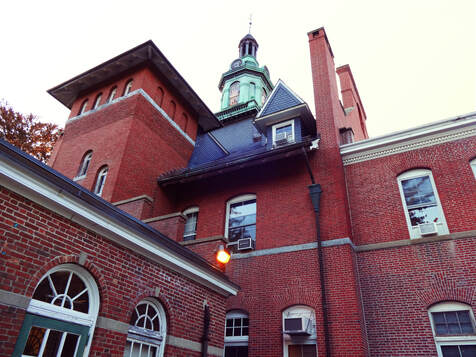 From their leadership in the field of public health and their vision for telling its history, our founders included Chester “Chet” Kennedy, Helen Meltzer, and Carolyn “Hooky” Darack and others, bore the nation’s first museum dedicated to telling the history of public health.
The Public Health Museum opened on September 30, 1994, the 100th anniversary year of the Old Administration building at the historic Tewksbury Hospital, where the Museum is housed.
​
Our Mission: To celebrate the history and achievements of public health.

The Public Health Museum preserves the past, inspires future practitioners, educates the public, and advances the
​future of public health through partnerships with academic institutions.

The Museum occupies six rooms on the ground floor of the Old Administration Building and includes both permanent and temporary exhibits. It is staffed by the Board of Directors and volunteers.

The museum hosts groups from public and private secondary schools, civic organizations, medical schools, colleges and individuals interested in public health.  Visitors have come from all of the New England States and as distant as California and Japan.  As awareness of the Museum increases, so have donations of antique medical equipment, displays and paraphernalia to the museum for its use.

Learn more about the Museum: https://www.youtube.com/watch?v=IE3y469XvDc
​

​Tewksbury Hospital was established in 1852 as a state almshouse to care for the poor, which included a growing number of immigrants. Almshouses were the Commonwealth’s first venture into caring for the poor, a duty which had previously been carried out by the cities and towns. Opened on May 1, 1854, with a capacity for 500, the almshouse population grew to 668 by the end of the first week, and to over 800 by May 20th. By December 2, 1854, there were 2,193 “paupers” who had been admitted to the almshouse, nearly 90% of these listing European countries as their birthplace. The almshouse reported having 14 employees at that time, and was spending 94.5 cents per week per resident.
​
In 1866, the almshouse began accepting the “pauper insane,” becoming the state’s first facility to specifically accept cases with the diagnosis of chronic insanity. By 1874 the facility had become diversified: 40% was used as a mental illness ward, 27% as a hospital ward, and 33% as an almshouse. The chronically ill population continued to grow, alcoholics were admitted for treatment, and programs providing therapeutic industrial and occupational therapy were added in the 1870’s. A Home Training School for Nurses was established in 1894, and the school became a full-fledged three-year program in 1898.
​
The most famous patient of the 19th century was Anne Sullivan, the famed teacher of Helen Keller, who spent four years at the Tewksbury Hospital (1876-1880) before being transferred to the Perkins School for the Blind in what is now known as Watertown, Massachusetts. At age 20, she left the school to go to Helen Keller’s home in Alabama. One of the buildings here is named in her honor.
​The hospital changed its name several times in its 150-year history, with facilities added for treating tuberculosis, smallpox, typhoid fever, and other infectious diseases. It continued to serve as a “last resort” for patients in need of shelter and supervised care.

The historic building of the Public Health Museum

The Museum exhibits, collections, archives, and administrative offices are housed in the Old Administration Building of Tewksbury Hospital. Built in 1894, the Queen Anne style building stands at the head of the original main entrance on East Street.

Designed by Boston Architect John A. Fox, the building was part of a major construction project to upgrade the original almshouse. It was later enlarged in 1915, with a section added in the 1920’s.
​
In January, 1994 the Museum building and the Tewksbury campus were placed on the National Registry of Historic Places. Named the Richard Morris Building in 2004, it honors the memory of a Tewksbury Hospital trustee of long service.